Bangladesh, officially the People’s Republic of Bangladesh (Bengali: গণপ্রজাতন্ত্রী বাংলাদেশ Gonoprojatontri Bangladesh), is a country in South Asia. It is bordered by India to its west, north and east; Burma to its southeast and separated from Nepal and Bhutan by the Chicken’s Neck corridor. To its south, it faces the Bay of Bengal. Bangladesh is the world’s eighth-most populous country, with over 160 million people, and among the most densely populated countries. It forms part of the ethno-linguistic region of Bengal, along with the neighboring Indian states of West Bengal and Tripura. 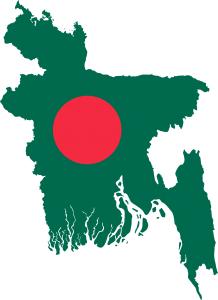 The 13th and 15th Century From the 13th century A.D. the Buddhists and Hindus were swamped by the flood of Muslim conquerors and the tide of Islam up to 18th century. Sometimes there were independent rulers like the Hussain Shahi and Ilyas Shahi dynasties, while at other times they ruled on behalf of the Imperial seat of Delhi.

From the 15th century, the Europeans, namely Portuguese, Dutch, French and British traders exerted an economic influence over the region. British political rule over the region began in 1757 A.D., when the last Muslim ruler of Bengal was defeated at Palassey. In 1947 the subcontinent was partitioned into India and Pakistan. Present Bangladesh became the Eastern Wing of the then Pakistan. But the movement for autonomy of East Pakistan started within a couple of years because of language and cultural differences and economic disparity between the two wings.

The Language Movement The Language Movement of 1952 to recognize Bangla as a state language may be termed as the first step towards independence. Political and economic deprivation of the Bengalese prompted Bangabandhu Sheikh Mujibur Rahman, the Father of the Nation, to put forward in 1966 his historic six points, the “Magna Carta” which in effect structured the foundation for East Pakistan’s future independence.

The War of Liberation In the 1970 elections, even though the Awami League emerged as the largest party in Pakistan Parliament, it was not allowed to form the government by the ruling military junta. In the backdrop of a non-cooperation movement launched against the military regime by Awami League. Bangabandhu declared at a historic public meeting held at Ramna Race Course (renamed Suhrawardy Uddyan) on 7 March, 1971, attended by around 2 million people, “The struggle this tune is the struggle for freedom, the struggle this tune is the struggle for independence.” It was a defacto declaration of independence.

Thus in a pre-planned manner on 25th March 1971. The Pakistan army embarked on what may be termed as history’s worst genocide. A military crackdown was ordered, and Bangabandhu Sheikh Mujib was arrested and taken away to West Pakistan. But just before he was arrested he sent out a call for the liberation war to begin, known as the Declaration of War of Independence, this hurriedly written historic document read as follows:

“Pak Army suddenly attacked EPR Base at Pilkhana, Rajarbagh Police Line and killing citizens. Street battles are going on in every street of Dacca. Chittagong. I appeal to the nations of the world for help. Our freedom fighters are gallantly fighting with the enemies to free the motherland. I appeal and order you all in the name of Almighty Allah to fight to the last drop of blood to liberate the country. Ask Police, EPR, Bengal Regiment and Ansar to stand by you and to fight. No compromise. Victory is ours. Drive out the enemies from the holy soil of motherland. Convey this message to all Awami League leaders, workers and other patriots and lovers of freedom. May Allah bless you. Joy Bangla”.

Independence After nine months of war, the Pakistani occupation forces surrendered in Dhaka on 16th December. 1971 after killing an estimated three million people. Due to the heroic resistance and supreme sacrifices of the valiant freedom fighters Bangladesh finally became an independent sovereign state. Father of the Nation Bangahandhu Sheikh Mujibur Rahman was the founder- president of Bangladesh. He was subsequently assassinated on 15th August, 1975 by a group of conspirators.